Mr Aziz Hazara, Alumnus (2017 Batch) of UMISAA sends 20 tonnes of rubbish from Afghanistan to US as 'gift to the American people

Aziz Hazara is tracking an unusual shipment - 20 tonnes of rubbish collected from Bagram air base, formerly the largest US military base in Afghanistan. It is making its way west, back to its source. It’ll pass through Karachi and the Gulf, sailing the Indian Ocean and crossing the Atlantic to return to the US.

The artist, who currently works in Kabul and Berlin, estimates that the journey could take up to a year as it carefully retraces what he refers to as the “supply chain of the global war on terror” – the route along global ports and cities that American soldiers and weapons passed through to get to Afghanistan during the war. When it finally lands on US soil, it is home. Hazara calls it his “gift to the American people”.

To skirt regulations on refuse imports (the US prohibits such shipments even though it exports tonnes of its own waste to South-East Asia every year), he has labelled the junk-filled container as art. Having checked the rules, Hazara explains that if it makes it to the country successfully, it cannot be shipped back. “When it arrives, it belongs to the Americans. Once it is in America, you can’t undo it,” he says.

The ongoing work has been commissioned for the 2022 Carnegie International, a major art exhibition held every three to four years, which will take place in Pittsburgh in September.

When US troops withdrew from Afghanistan last year, after a 20-year occupation, they left behind death, chaos and rubbish. Bagram air base, where more than 100,000 American troops had served from 2001 to 2021, had a shopping centre and fast food restaurants. Now, heaps of rubbish, toxic plastic, scrap metal and electronic waste are all that remain, and the Taliban have taken control of the airfield and the rest of Afghanistan.

More than a gesture, A gift to the American people (its working title) considers the legacy of war and the idea of circularity as weapons, equipment and military detritus manufactured in the West make their way into the hands of the Taliban after the collapse of the Afghan National Defense and Security Forces, furthering death and destruction. It also critiques political and economic complicity in an age of globalised conflict and proxy wars.

Born in 1992 in Wardak, a province in Afghanistan’s central region, Hazara and his family moved to Kabul when he was a child. Life in the capital, which has been marred by the Soviet-Afghan War, civil conflicts and the US invasion, shaped much of his memories and world view.

“Part of childhood in Kabul is on one side, a horror show," he explains. “On the other side, war is so normalised that you don’t realise it until you see it from a distance.”

Ranging from video and photography to installation and performance, his works contemplate war and occupation, both Soviet and American, and their lingering effects. Hazara often features children in his works, a choice that he says reflects his “obsession” with his own childhood.

In December, he won the $100,000 Future Generation Art Prize from the PinchukArtCentre, Kyiv, for his work Bow Echo (2019). The five-channel video installation shows young boys struggling to climb rocky mounds along the hills of Kabul as fierce winds attempt to knock them down.

The children blow on toy bugles, producing bleak sounds diminished by the howling gales. The futility of their efforts is palpable, one almost runs out of breath with them, as they clamour for a kind of control or recognition.

In another work, Rehearsal (2020), the artist’s young subjects play a different game. A boy recreates the sound of gunfire as he sits on the shoulders of another who swings him side to side like a weapon mount.

Hazara says many children in Afghanistan have mastered the mimicry of such noises, even recognising the differences between the Taliban-used Kalashnikovs and the US military’s M16 rifles. “War has become very normalised,” he says. “We grow up with it, we die with it. We commemorate it, we celebrate it and we remember it.”

As the video’s title suggests, Rehearsal shows the children mirroring what they see around them, performing what is expected of them, especially as young boys, and practising for what may be ahead. What begins as children’s games may become more sinister later on, and in the context of a war-stricken country, the outcome feels more fated. 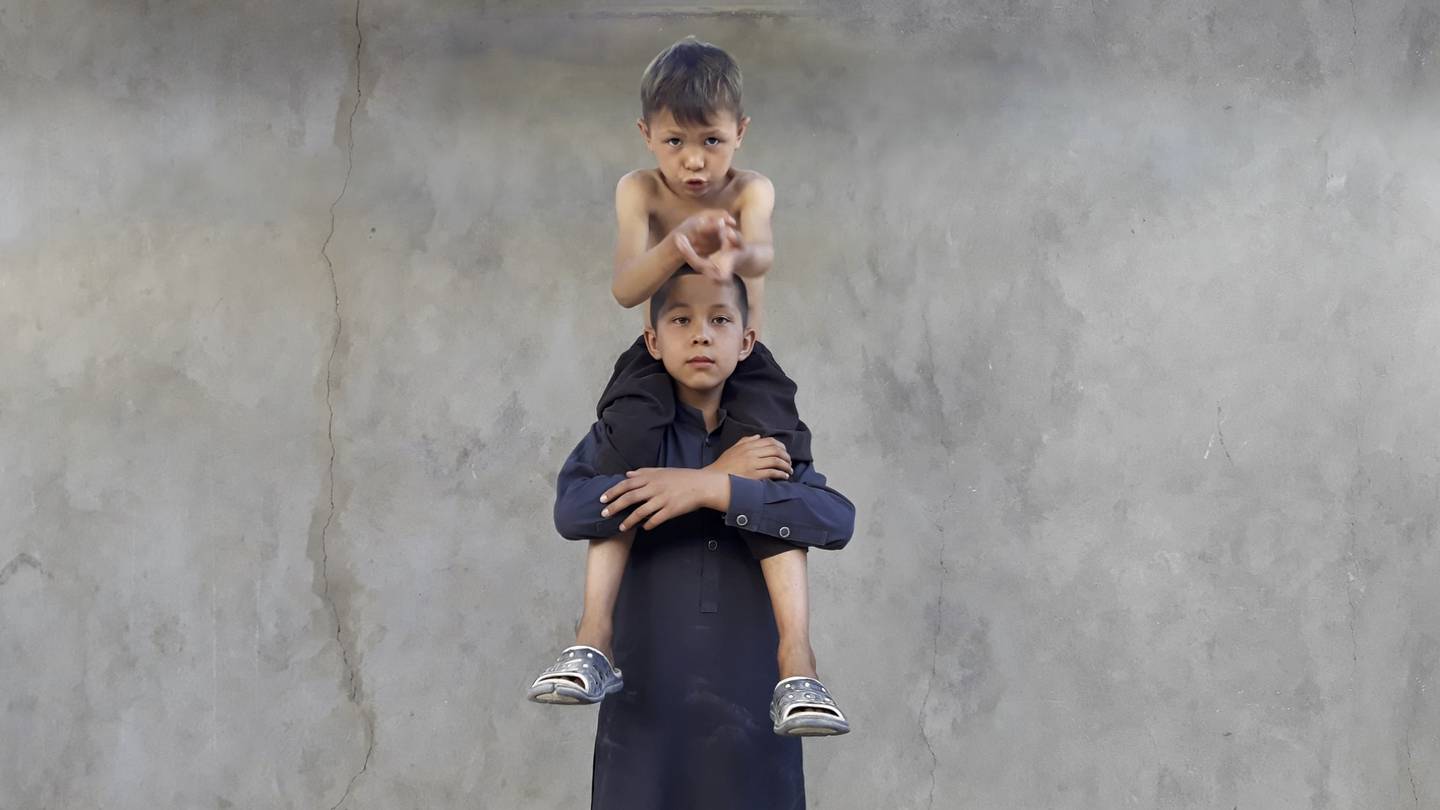 The artist’s characters not only underscore a loss of innocence, but another form of circularity, of war begetting war. Afghanistan’s crisis is the outcome of generations of conflict, constructed by invading forces battling out their own interests on Afghan land.

“The Taliban that we have in Kabul now are the kids that grew up in the refugee camps in Pakistan [in the mid-1980s and 1990s]. They have been through all these ‘J is for Jihad’ campaigns,” Hazara says, referring to a $50 million US-backed educational programme that promoted the use of “mujahideen textbooks”. Containing lines such as “Doing Jihad against infidels is our duty”, the books and lessons aimed to further religious war to help combat the Soviets.

“This process of radicalisation is an American project,” Hazara says.

The artist turns to a different kind of weapon in Eyes in the Sky (2020), where a drone follows children as they walk the arid mountainous landscape and gather to play around an abandoned tank. That their playground is made from a machine intended to kill doesn’t seem to bother them as they hop on to its metallic body carrying toy guns. 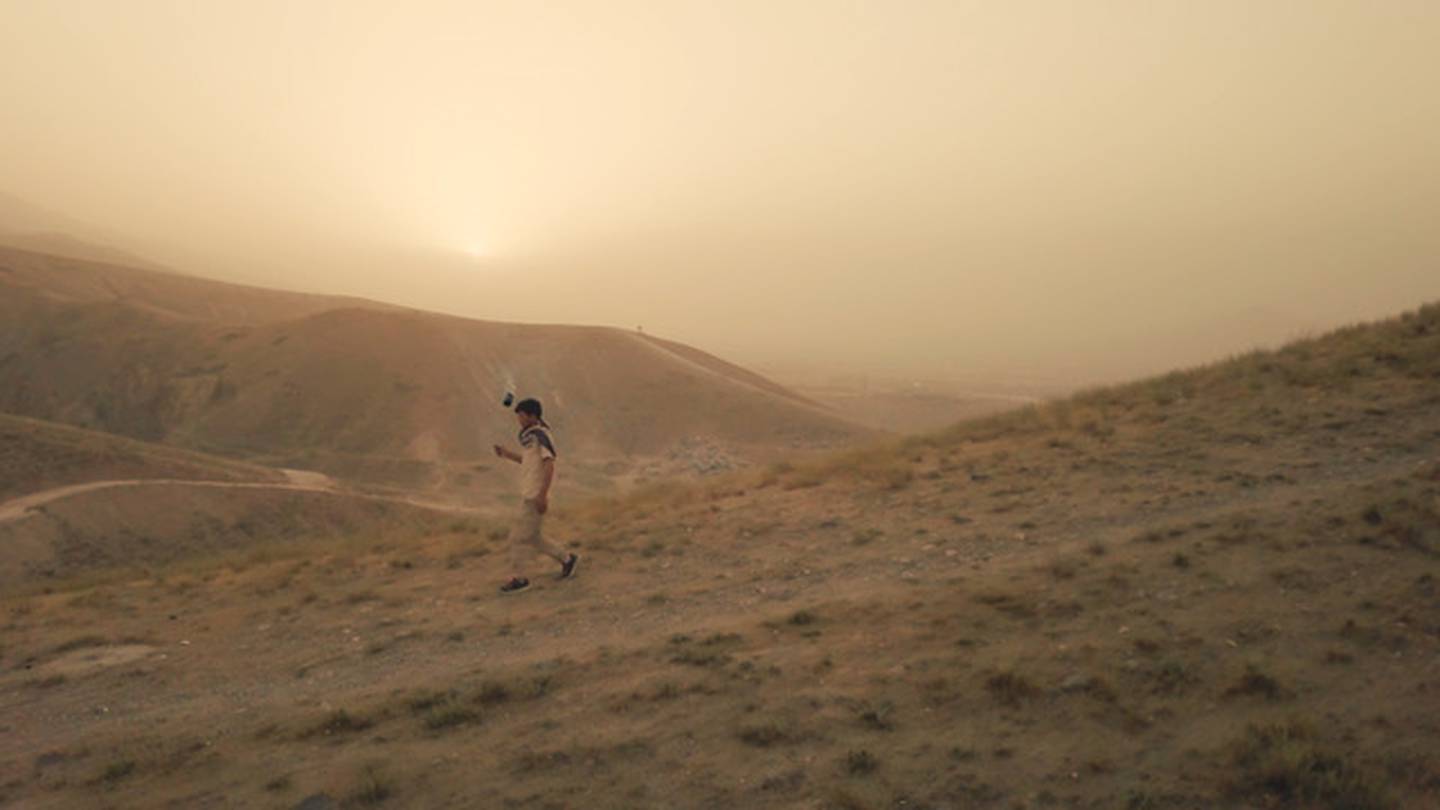 A still from 'Eyes in the Sky' (2020), a single channel video installation by Aziz Hazara. Photo: Aziz Hazara / Experimeter, Kolkata

Addressing the use of surveillance in modern warfare, Hazara considers the drone as a technological panopticon, keeping a watchful eye over its subjects. “Kabul is a city that is constantly under surveillance by the Americans, the Germans, the Brits, the French,” the artist says of the period before the American withdrawal. “There are all these drones, kite balloons, objects flying above you. They watch you 24/7.”

He is referring to the spy balloons that were scattered across Afghan skies from 2007 (they were first used in Iraq in 2004) to observe and record the movements of residents and gather intelligence on potential attacks, including suicide bombers. “They contain an archive of a city, a collection of images created after being constantly being watched without permission,” Hazara says.

Unsurprisingly, the drones were reviled by locals, casting a psychological effect that prevented them from living their daily lives. Men were afraid of sleeping on their rooftops, a common activity during hot summer months, and women were cautious about stepping out to their yards.

Towards the end of Eyes in the Sky, the boys turn their guns upwards, firing at the all-seeing eye. In real life, when American crews would take down the blimps for maintenance, they would note that they were ridden with hundreds of bullet holes.

Such wartime surveillance practices are distinctly American – high-tech, exportable and therefore highly bankable. This, too, has become a legacy of modern war. Formerly in the hands of the US, vast stores of data on the Afghan people, including digital histories and biometric data, collected over the years through a national ID and voter registration systems, are now with the Taliban, according to various reports, a shifting threat for which the implications are yet unknown.

But while the cameras of the military are intent on watching, Hazara’s camera is concerned with the telling of memories and stories. The artist’s fascination with the camera as an object that bears colonial and militaristic histories began as a “problematic relationship”, he says. This was largely influenced by his witnessing the ways foreign journalists in Kabul while growing up. “I didn’t like when people, especially white journalists, were walking around the city and photographing us without permission. I found that they were exoticising us,” he explains.

In his practice, he casts a different lens, one that rejects dehumanising images of conflict prevalent in international media, and presents stark views of Afghanistan’s landscape and those who live in it. “It’s my constant struggle to not depict [violence], but use visual devices that might appear well-composed, but on the other side are brutal,” he explains.

His work, he says, is a continuous search along “the border between being political and poetic”. 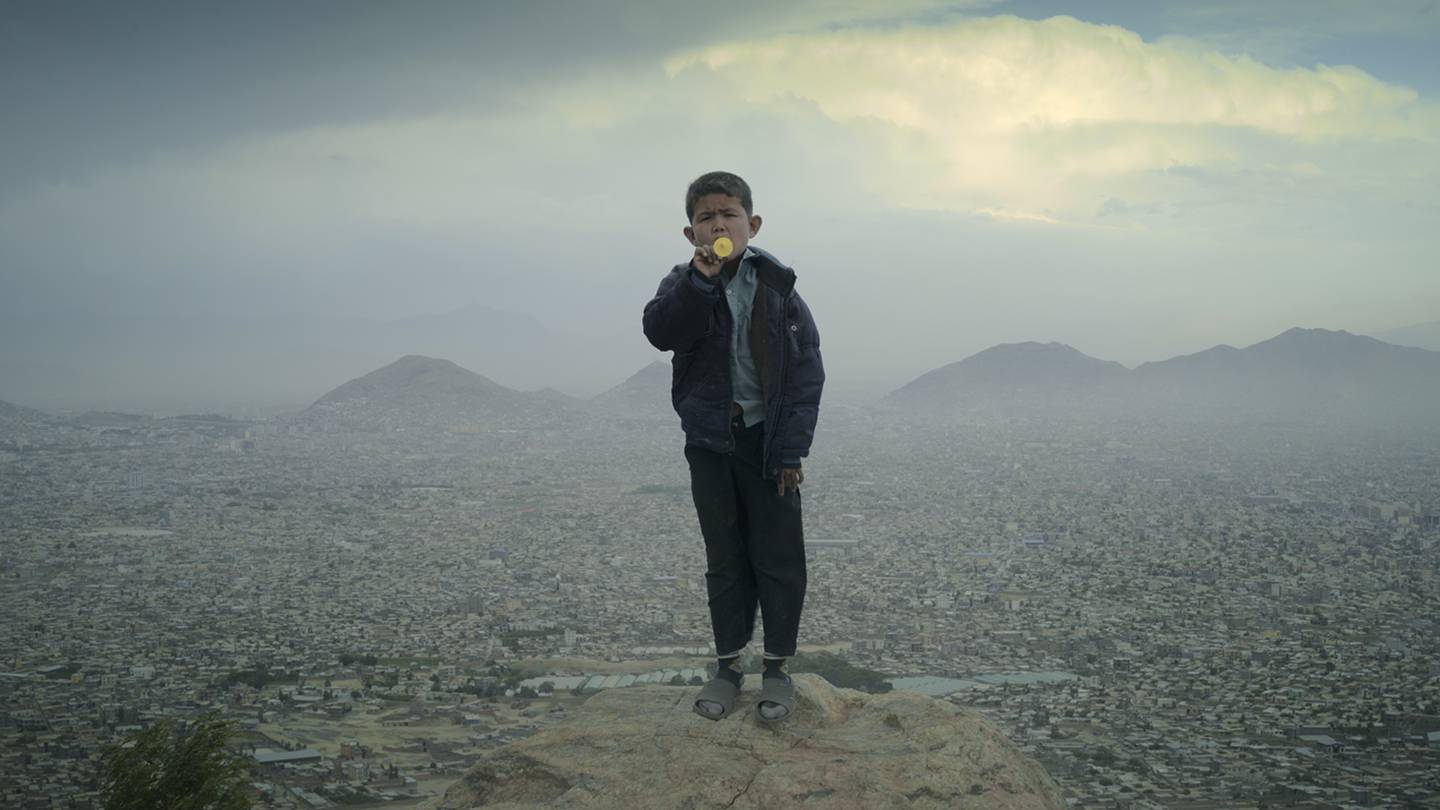 Sound plays an integral part of it, too. Hazara once again draws from his childhood in Kabul, where the city’s soundscape blends the hum of drones, the whirr of “choppers flying in and out of the green zone”, recitations from “masjids calling you for prayers”, and on occasion, the sound of "suicide bombings".

“Sound becomes a constant reminder of your geography and that was important to translate into the work,” he explains.

The use of sound is perhaps most chilling in Monument (2019), one of Hazara's most powerful pieces. Running a little over five minutes, the double-channel video installation, shown at the Biennale of Sydney in 2019, takes place at a memorial site for the victims of a 2018 suicide bombing. Carried out by the Islamic State – Khorasan, an offshoot of the militant group borne out of another war between other nations, the attack targeted an education centre in a Shia neighbourhood in Kabul. A total of 48 students, men and women, were killed and 67 people were injured.

One side of Monument shows the graveyard and memorial site in a wide-angle view, an arrangement of flags and posters, while the second screen offers a close-up of the latter, revealing the faces of the students, mostly teenagers, their names and dates of birth and death.

There is no narration and little context needed. As these scenes play, we hear only a steady low noise: the wind and the flags flapping along, then auditory cues of war, looming helicopters and soaring jets.

The artist reminds us of what we know to be true, that war does not end with a withdrawal, and not even with the laying down of weapons. It scars, stains and sticks – it does not wash off, even if the US and its coalition may wish it so. Today, Afghanistan is not only faced with the grief of more than 170,000 dead (a conservative estimate by the Costs of War Project) and millions displaced, but also a humanitarian crisis that is rapidly worsening.

Contained in Hazara’s work is a ruminative condemnation of imperial violence and a tragic foreshadowing of the country’s future. Like the sound of Monument, the road ahead is vast, eerie and cold.