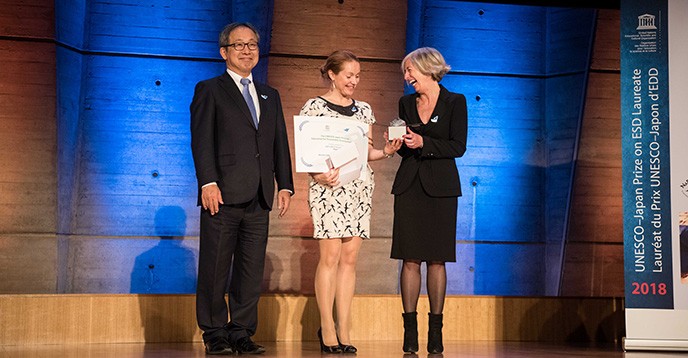 UNESCO-Japan Prize on Education for sustainable development, funded by the Government of Japan, consists of three annual awards of USD 50,000 for each recipient. It was awarded for the first time by the Director-General of UNESCO in November 2015.  The Prize and award winners recognize the role of education in connecting the social, economic, cultural and environmental dimensions of sustainable development. It was established by the Executive Board of UNESCO at its 195th session within the framework of the Global Action Programme (GAP) on ESD and officially announced at the UNESCO World Conference on ESD (10-12 November 2014, Aichi-Nagoya, Japan).

As the area of expertise directly relates to Education for Sustainable Development (ESD), so this piece of information received from Madam France Marquet, SAF Representative to UNESCO &  Principal Trustee, MSF may be of use for the respective UNESCO Institutes of Excellence in your chapters Or any NGO(s) working in the ESD. The Nominations, if any, may kindly be routed through SAF Representative to UNESCO.  The quick links are shared along with the detailed email below:

The call for nominations of the 6th edition of the UNESCO-Japan Prize on Education for Sustainable Development (ESD) is now open. Funded by the Government of Japan, the Prize rewards exceptional projects and programmes undertaken by institutions, organizations or other entities in the field of ESD.

Secretariat of the UNESCO-Japan Prize on Education for Sustainable Development