Review of 'Culture of the Sepulchre' 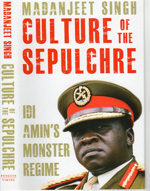 "Culture of the Sepulchre" by Madanjeet Singh is a chilling read on the horror and atrocity in Idi Amin's Uganda. Ambassador Singh whom I have had the privilege to meet several times is an Indian freedom fighter, an acclaimed author of several classics and a painter who was also India's Ambassador to Uganda. He is currently UNESCO Goodwill Ambassador. Since there is no way to be able to summarize or re-state all the fascinating incidents as told by the author in the book, one thing is certain: no reader can stop reading the book until the final page -such is the level of anxiety and absolute dismay of the notoriously erratic behavior of Amin yet the most interesting manner in which these have been outlined makes this an enthralling book.

The book begins with the foreign secretary's letter to the author who is at that time posted in Columbia with the message that he has been appointed India's next high commissioner to Uganda. Known for his ethnic cleansing, gross human rights abuse, numerous wives and children, murdering many yet without remorse, Idi Amin's Uganda is not a great destination for postings but author takes it with a stride. Very soon, the antics of the dictator comes to its full swing. One day, all ambassadors are called impromptu to the airport to receive a new Boeing 707 aircraft. After 2 hours of waiting in the sun, the aircraft lands and Idi Amin is seen. But the aircraft brings in a herd of cows that were imported from England at a cost of $ 60 million. Addressing the Ambassadors, Idi amin says, "Now you will not have to live on UNICEF powder milk. Rivers of milk will flow like the Nile." At one time, Idi Amin also declared himself CBE (conqueror of the British Empire) after the UK broke off all diplomatic relations in 1977.

There are many such humorous and amazingly beguiling instances along with author's own meetings and encounters with the Idi Amin. Readers can easily see what the repercussions of having such a brutal, erratic, irrational almost insane person ruling the country not only to the people of Uganda but also to the neighboring countries. There is a detailed account of how the author fought against all odds including professional jealousy back home to rescue hundreds of Indians fleeing Idi Amin's Uganda, by all means the most dangerous place on earth at that time.

There are other books and also movies made on the Ugandan dictator which I have seen but by all means this book is the most interesting of all the previous accounts of Idi Amin's Uganda told by a person who saw first hand all the violence and mayhem. I recommend this book not only to diplomats, officials, political leaders and students but also to the general public here in Nepal and elsewhere.