Hema Shironi explores identity as a transitionary idea at Colomboscope 2021

STIR speaks with Shironi, the multidisciplinary artist, on her creative practice questioning the ideas of migration, home and identity, and her work for Colomboscope.

“I would say that the rented houses of my life have had the greatest impact on my work. All through my childhood my family migrated from one place to another, creating an alarming degree of confusion in me, in terms of how I would relate or connect with my new surroundings and new community,” says Sri Lankan multidisciplinary artist, Hema Shironi. “I experienced considerable difficulty in connecting and categorising myself within each one of these newly moved into communities, it raised questions and even then, forced me to look at the idea of belonging,” she adds.

This gypsy-like account of her childhood has become the bedrock to Shironi’s practice, that is founded on evoking an atmosphere or perhaps the staging of a scene that embraces aggressively a philosophical, anthropological and political dismantling of identities. The artist uses textural materiality to explore the politics of domesticity. She explores the roots of traditional roles set in place through our language and cultural tradition, our religious mythologies, our collective memories and accepted gender roles. As we unravel some of her earliest source material, we begin to understand what draws her to examining the identity as sometimes fluid and sometimes dynamic rather contradictorily anchoring oneself to a place and time. 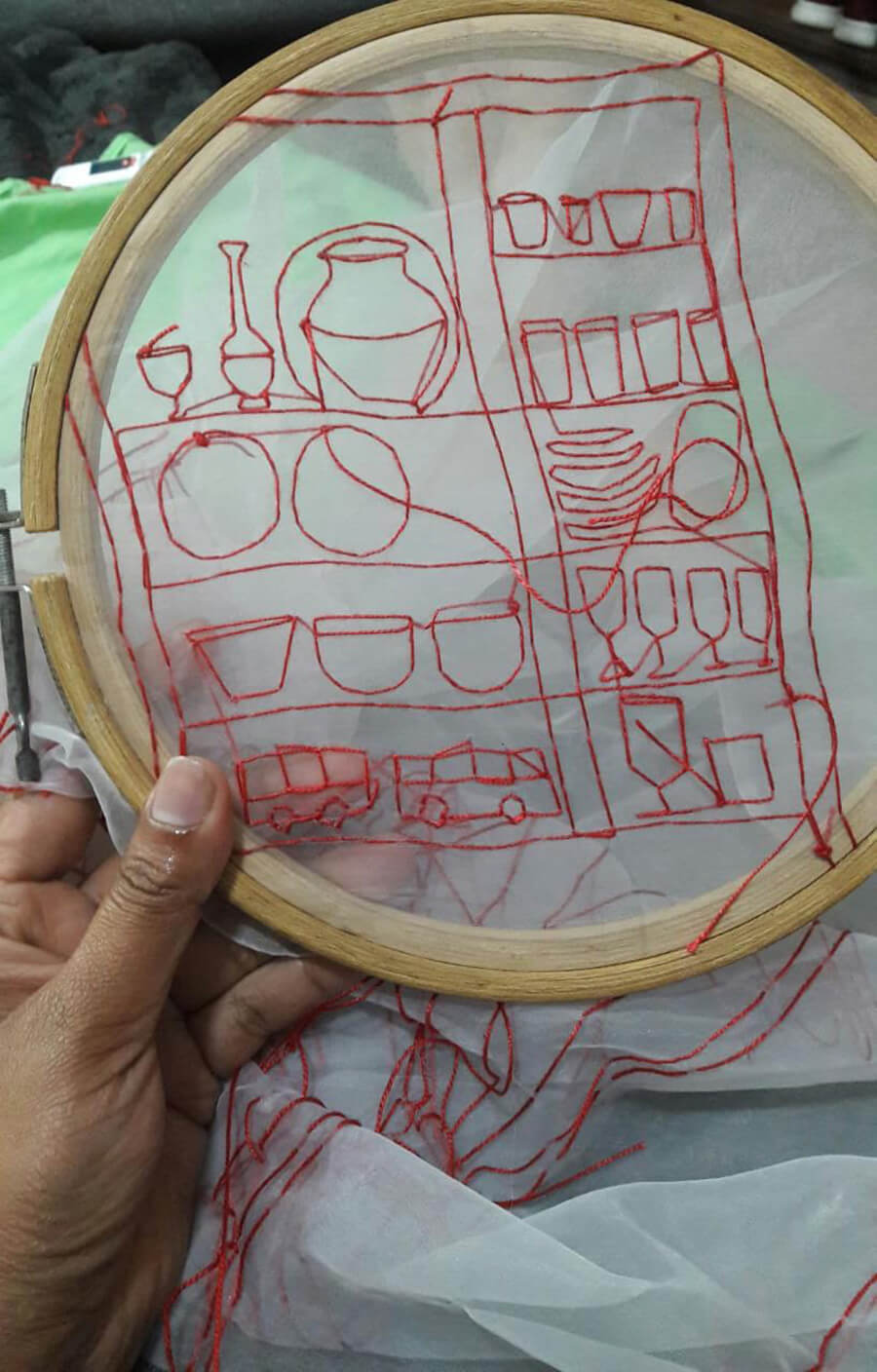 Walking House
In 2010, the artist moved from the Central province of Sri Lanka to the Northern Province, settling down in Kilinochchi. This was the first instance where the contemplation of the ‘self-identity’ moved from a subconscious field to an actual concrete rhetoric making its way into Shironi’s work. “The bounded landscape there (Kilinochchi), the day-to-day life experiences within the community, their local beliefs and how these impacted their world, it made me think of my own identity,” says the artist. Identity for Shironi seems to stem out of the mythos she has built from her own lived experience, much of which is rooted in the external that is the places she grew up in, the homes that she lived in for, however short or long a period. On one hand there is an overwhelming sense of nostalgia in her work, on the other is the assured commentary bordering on critique, of the impact that the unbridled human development has had on these spaces, rendering an almost irreversible impact on to these external environments. 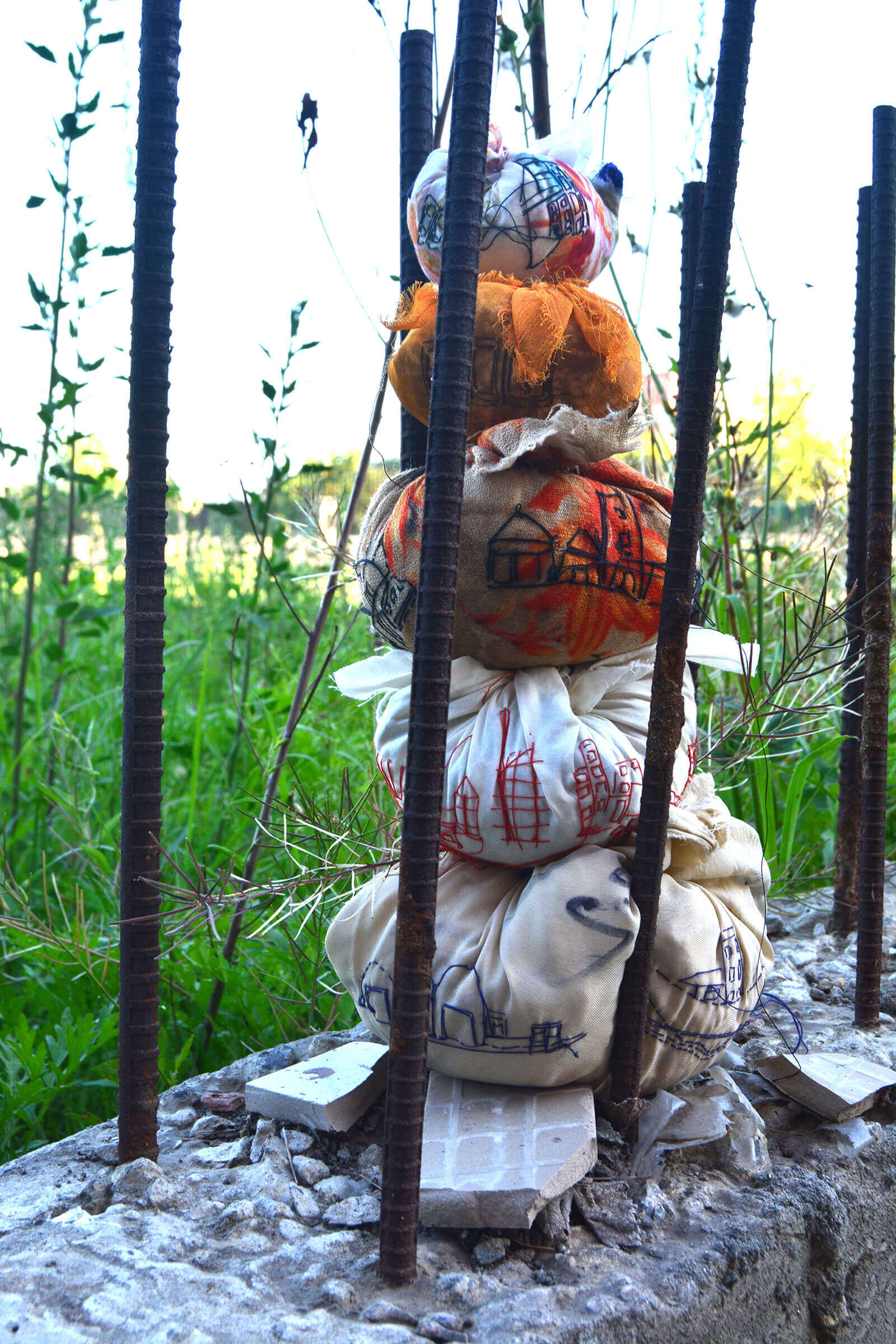 While working with concepts of home and identity that are deeply entrenched in the idea of a place, which for Shironi is Sri Lanka, it is hard not to come face-to-face with a history of colonisation, displacement and eventually migration. History – personal or communal – often becomes an amalgam oral repertoire of tales, anecdotes, accounts and legends. The poetics of storytelling finding its way into the visual is hard to miss in Shironi’s work, which often reads as something that has no beginning and no end, it is as worked upon and stitched together as a tale that has gone through a hundred oral renditions, passed along from one voice to another, re-shaped and re-shaped again.

“I am thinking about stories and experiences from my childhood through my life which have brought me to this point,” the artist explains. “I was born in Kandy, it is closest city to Matale. These two places are surrounded by mountains and home to tea plantations. They are also famed Buddhist sites, with numerous temples and heritage sites which have people from all cultures living close by. I grew up in this culturally cosmopolitan surrounding, with a Catholic father, a Hindu mother, raised between two religion with one foot in each tradition. I didn’t feel any boundaries limiting my thoughts through my practices.”

A young Shironi would go to Hindu temples with her grandmother and mother, who were pious ladies keen on passing their traditions to the next generation. Religious myths and legends were part of this education and while studying in a Catholic school and attending Sunday Mass, the dramatic stories of the Bible were a regular feature. These tales interlace through her creative practice, with a deepened complexity of her multi-lingualism. “My mother tongue is Tamil and Sinhala, these are languages from two divided Sri Lankan ethnic communities, wherever I go these two languages travel with me,” says the artist, “and while cities accept this, in certain communities and places it confuses people. This confusion, this need to put one within a box also motivates my work. Identity to me is flexible. It can change in a moment, who we are, are the stories we tell ourselves and allow other to tell of ourselves.”

Threadwork, cloth and embroidery have often been ways in which women artists reclaim and express a feminist intent. For Shironi this has been a question of necessity more than anything else, the conceptual decision to use fabric as material was to an extent one of convenience – it was easily transportable and a flexible medium to work with, it moulded in accordance with her inventive dimensions. “Fabric too has its own emotional language according to the region and community that produces or largely uses it. The colour palette, the weave and texture are important elements to this emotional language. My mother and grandmother were great at tailoring,” says Shironi adding, “our home was filled with fabric cut pieces and perhaps the familiarity with the medium drew me towards it. I learn to use the material in flexible ways, for instance, a piece of fabric draped as a saree would sometimes find its way as a curtain or upholstery in our home, this showed me the potential of engaging with fabric.”

For Shironi there was an illicitness to making fabric art and embroidery art, which was enough of a feminist medium to be accepted in her domestic sphere, she would often be left alone to create because her art didn’t appear as radical or rebellious. What was secret to the eyes of others was what was actually being created from this feminine activity of embroidering and working with fabric. Nobody knew of the stories which were being narrated, the questions which were being asked, and the identities that were being dismantled. As a fact, Shironi dislikes viewing her work from a feminist-based perspective, stating that this sometimes limits the perspective and thus reading of the work. 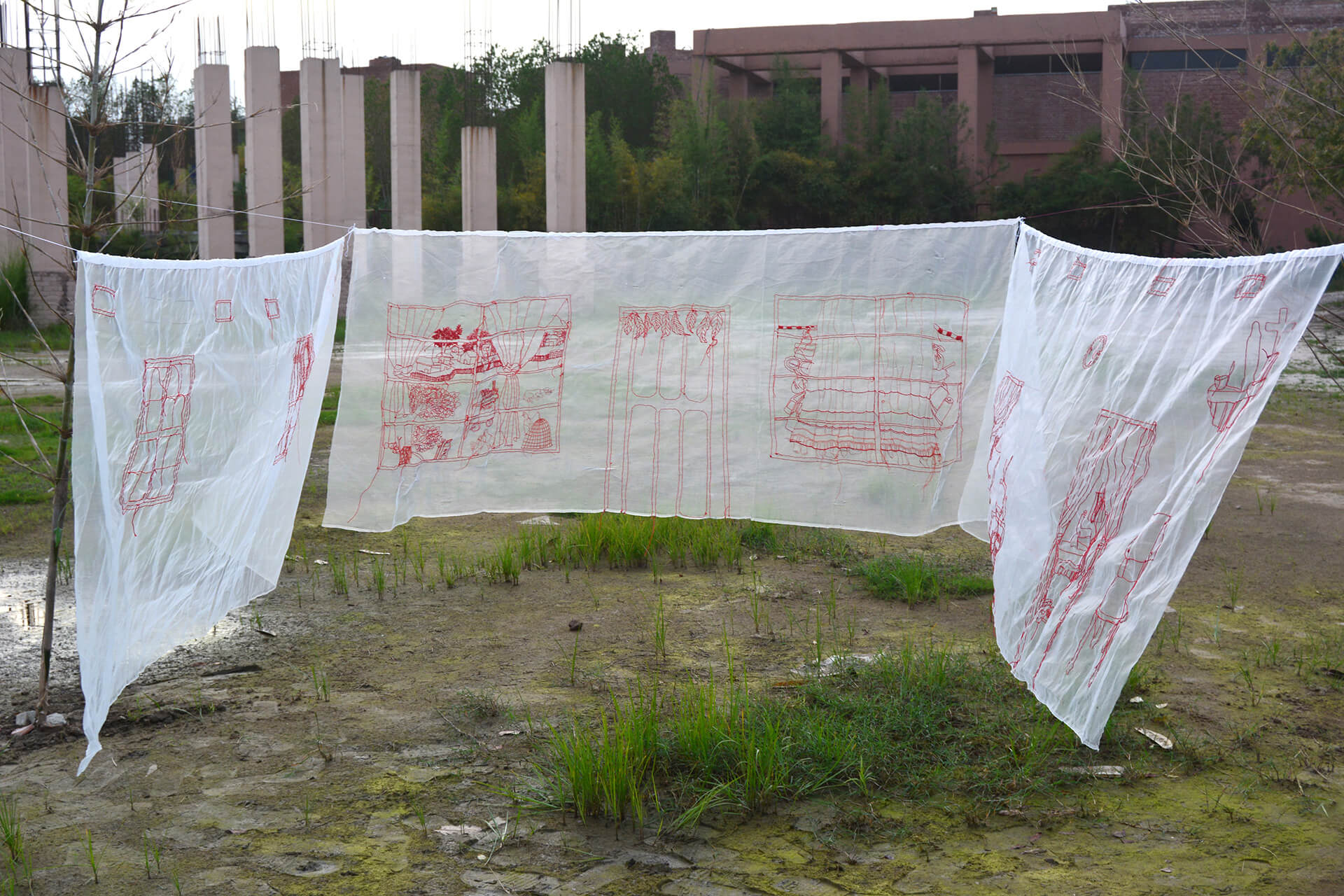 Speaking on her work for Colomboscope: Contemporary Art Festival 2021, the artist says, “My work is a reflection or a narrative of my own life and the life of many others like me for who home has become a temporary place.” There is a temporality in Shironi’s work which is reflective of the fact that the idea of one’s ‘home’ can take on new meaning for those who cross geographical and cultural borders. It begs the question that what really makes a place a home? Is it possible to ask for such a permanent anchorage in a world that is increasingly migratory? For the artist who herself travels often, the changing landscape out of the window of a moving car is inviting and exciting. There is something to the incredibly human need to migrate and move that has found its way into her work. “Existence is migratory,” she says, “Living in one place is not what life is about.” 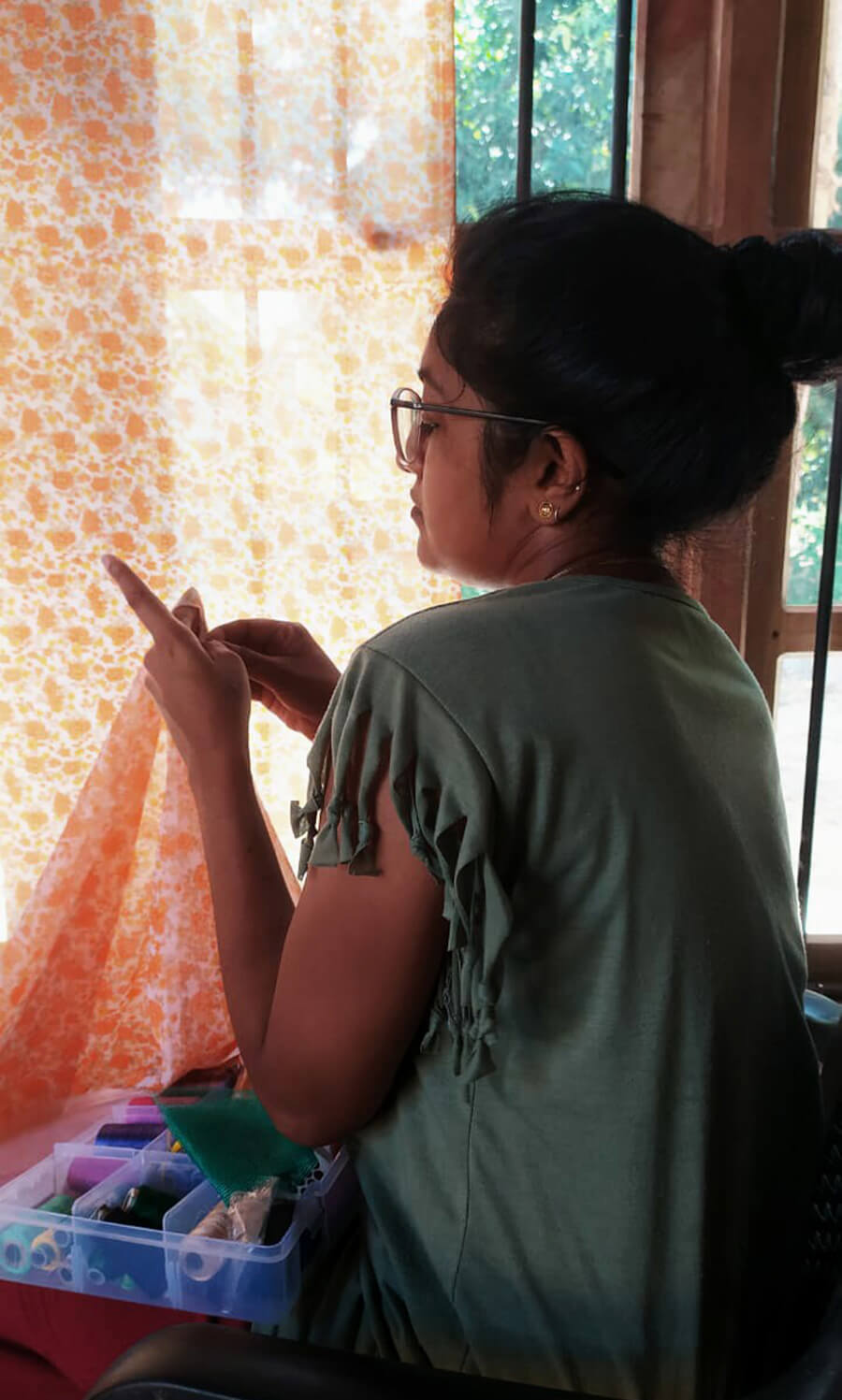