The National Student Contests on IWRM were organized in Central Asia from April 23 to May 13, 2018. The total number of participants reached more than 150 young researchers, of which only 4 winners took part in The Regional Stage of the Contest. The closing national Contest was the one in the Islamic Republic of Afghanistan, which was held on May 13 at the Kabul Polytechnic University with the assistance of the German Academic Exchange Service where the winner was Mohammad Najim Nasimi. As a result of all National IWRM Contest, the winners of the National stages were gathered in Dushanbe at the Regional IWRM Contest in Dushanbe, combined with the Youth session of UN International Water Decade.

Nasimi’s other achievements acquired in the last 4 months are as follows.

1-      Winner of Olympiad on IWRM in Afghanistan on May 13th 2018 organized by World Bank, GWP, DAAD, UNESCO, CAYFWater and German Kazakh university.

2-      Presentation related to climate change effect on Central Asia and the adaption options at High Level International Conference on the International Decade for Action ‘‘Water for Sustainable Development”, 2018~2028 in Dushanbe-Tajikistan, June 2018.

4-      Winner of Student research competitions on sustainable management of natural resources in Central Asia and Afghanistan 2018~2019, supported by the Climate Adaptation and Mitigation Program for Aral Sea Basin (World Bank) and Smart Waters (USAID) projects in modeling of Kabul river basin for studying the climate change affect and its adaptions.

5-      Invited to participate in International Symposium on Water and
Land Resources in Central Asia, which will be taking place on October 9~-11, 2018 in Almaty, Kazakhstan during which I will deliver a presentation regarding of my recent research on climate change effect on water resource of Afghanistan that will be published in Central Asian Journal of Water Research (CAJWR).

Receiving the certificate for the First Place of National IWRM Competition

Presentation on IWRM at the workshop/conference


Networking with the Conference Participants, Water Professionals and other Delegations 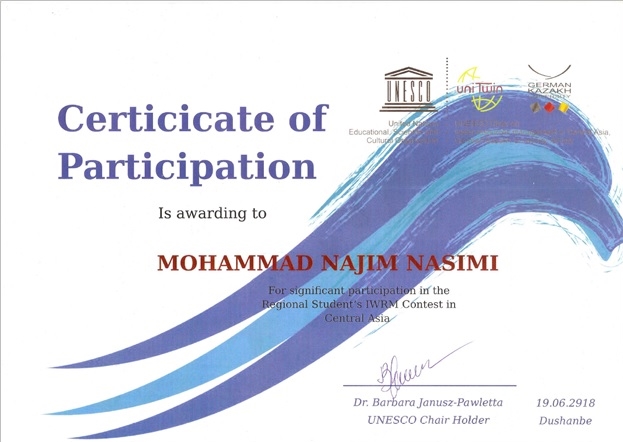 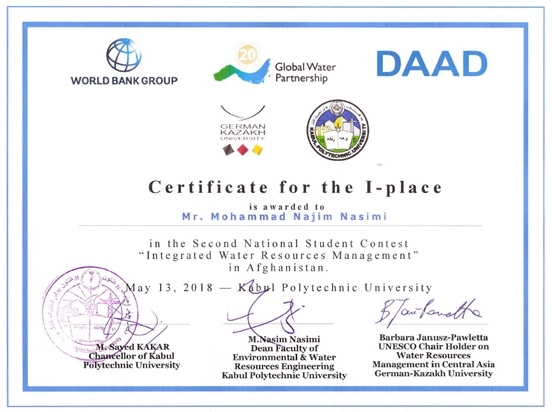